You are here: Home / Journal / Home from home at Lyndale 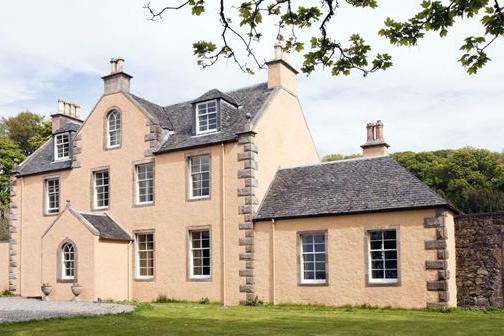 It’s very easy to get one’s Napiers in a twist, as there are rather a lot of them. Most people familiar with the history of the Highlands and Western Isles will have heard of “The Napier Commission” of 1883, called to resolve the issues raised by the Highland and Island Clearances and the crofters’ desire for secured tenure of their own parcels of land. The Commission of Enquiry led, eventually, to the First Crofters Act of 1886. The Napier here referred to was Francis Napier, 10th Lord Napier and briefly Viceroy of India. But the family was huge and the various ancestral trees grew from a wide scattering of acorns.

It was into this thicket of Napiers that I stumbled in the early preamble to my ‘interview’ with Marcus and Linda Ridsdill-Smith, owners of the gorgeously Georgian Lyndale House on the Isle of Skye.

We are sitting at the big oak dining table in what is a ‘new’ extension to the main house that comprises a large well-appointed kitchen (“to die for” as my companion gushed) that leads to a “Garden Room” (where the ‘interview’ is taking place) – panelled from floor to the triangular apex of the ceiling with wood from their own trees – looking through the adjoining Conservatory that gives out onto the formal rear gardens of the property.

Confident in my research into the history of the house, I pitch a warm-up question along the lines of the fact that Lord Napier once owned the house (a former MacLeod tack until 1781 when it was acquired by the MacDonald’s of Sleat). In fact, in 1900 it was bought, re-roofed and generally resuscitated after a period of decline by the 2nd Lord Napier of Magdala, who in 1885 had married Eva, daughter of Lord Macdonald. Nice try: same family but different branch. Marcus, his warm, brown eyes twinkling, gently corrects me before rattling off a couple of yarns about this particular Napier. I sit charmingly corrected. Later, I will return to the Napier couple and their tenuous connection to the present owners of Lyndale.

Having retired from organic farming and teaching in East Anglia in 1995, the couple came up to Skye in search of their idyllic home to finally settle down and relax in after long years of hard toil in their Essex fields. “Why Skye?” I ask them, quite reasonably. It turns out that they have friends in Sleat and used to come up to stay with them during their rare holidays. Linda, vivacious and blue of eye takes a deep breath and tries to describe what she calls “the emotional impact” of what they saw of Skye along with an “attraction that was very, very powerful”.

So, after the sale of the farm, they came up to Skye to spend a week looking round for a property that would suit them and be relatively easy-maintenance: which is when they became aware of (the now late) Dr. Mary MacLeod’s house known as Lyndale on the road between Portree on the east coast of the island and Dunvegan on the north-west coast. What they saw was a large Georgian building that had had extensions added to the left and right of the main building as well as a tacked-on front entrance lobby known at the time as “the railway carriage”, so inappropriate and ugly was it. It was, however, more or less a ruin. Appearances can be deceptive and it must somehow have been a ‘vision’ of what the house would have looked like before its perfect proportions were messed about with that seduced the intrepid house-hunters: they fell in love with it.

“What we saw was, that with a big dose of tender loving care and some renovation [sic] we would have a gorgeous house in an almost unique and astonishingly beautiful situation,” Linda explains. Without further ado they bought the house in 1995 and then a year passed before they moved in. It was not a year wasted, however. The first job was to restore the Gate House which had been condemned so that they had a base from which to begin the now admittedly daunting task of restoring Lyndale to its former glory. Initially they had thought, the way the majority of us would, of working steadily from room to room; restoring, re-building and where necessary, retro-fitting. That was until friend and architect, Ian Begg, came up with a radical re-think of the whole project. His design involved gutting the entire building, demolishing the offending extensions, constructing a centre steel frame girder skeleton and re-building back to the exact specifications of the visually appealing original. The result today is one of the most beautiful properties on Skye and indeed, anywhere else – in Scotland, probably.

Two years later and finally inside their much-adored house, they began offering rooms on a B&B basis and then let the Gate House as a self-catering holiday home. To this have now been added what were the Laundry and the Stables – also as self-catering holiday lets. (When work began on the stables, Marcus found, among the usual detritus, Robert Napier’s Bible inscribed in 1901.)

As much as possible of what was demolished has been re-cycled: the fire place in the Garden Room was fashioned using parapet stonework saved from the demolished ‘extension’; the original, main staircase, which had been lifted out in one piece, was snugly slotted straight back in from whence it came. The original doors and window frames were removed and sent away for complete restoration before re-instatement and much of the quarter-panelling in the drawing room was salvaged from the bedrooms. The large marble main fireplace having been stolen, a reclaimed fireplace was inserted with a decorated mantle-piece found in Cowgate, Edinburgh. The walls are painted a very particular shade of yellow known as ‘Indian Yellow’. Its particularity comes from the fact that the tint was achieved by mixing in cow’s urine coloured by the mangoes upon which they were fed.

The house is magnificent, the ‘modern’ extensions so perfectly designed and built to blend in and the conversions of the Gate House, Laundry and Stables provide unique, self-contained, five-star accommodation in wonderful surroundings that include lawns, woodland and, access to fishing from Loch Snizort. Views from the front lawn out beyond Lyndale Point are spectacular, with the Isles of Lewis and Harris visible on a clear, sunny day.

Lyndale House is more than ‘just’ a pleasant place for a quiet holiday; more too than a lovingly restored private residence that oozes welcome and a comforting embrace: it is an experience in and of itself. It is – as Linda enthuses – an “island in an island” because, once you have emerged from the one-kilometre-long woodland ‘drive’, you are in a very special world apart. Perfect!

I mentioned in the introduction a ‘tenuous connection’ between Marcus, Linda and the Napiers: Robert’s wife, Eva Maria Langham (widow of Capt Henry Langham) was the first daughter of Godfrey William Wentworth [Bosville-MacDonald] whose wife was none other than Marie Anne Wyndham, herself first daughter of George Thomas Wyndham of Cromer Hall, Norfolk. An East Anglian, then. No wonder the Ridsdill-Smiths feel they are so home-from-home.

For your very own Lyndale experience visit www.lyndale.net or call on (01470) 582329 and find out how best Marcus and Linda can accommodate you.