You are here: Home / Journal / Twice in a Lifetime 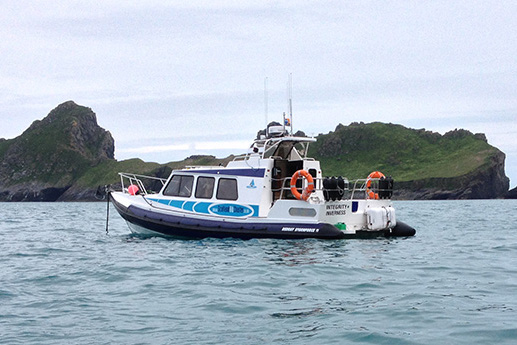 St. Kilda – an almost mystical archipelago jutting out of the Atlantic some 64 kilometres north-west of North Uist, and a once-in-a-lifetime destination for bird and nature enthusiasts, historians and Scotland-lovers alike thanks to its incredible history with its inhabitants, breathtaking geographical features and fascinating natural history and evolution. In 1986 St. Kilda was named by UNESCO as Scotland’s first World Heritage Site, and it is now one of only a couple of dozen of sites worldwide to hold this status jointly for its natural and cultural qualities.

Getting to St. Kilda has always been the difficult part. With helicopter access now very limited (not to mention expensive), journeys to St. Kilda for those of us without an eye-watering budget have been achieved with boat trips from Leverburgh on Harris. But add the accommodation, ferries, fuel and time spent travelling and your St. Kilda adventure is becoming more and more expensive and taking several days – all for a few short hours exploring the main island, Hirta.

Which is where the story behind this article comes in.

On check-out after an overnight stay at The Three Chimneys and The House Over-By a few months ago, Derek Gordon left us some information about his company Integrity Voyages – a private company offering trips around Scotland’s islands and west coast by comfortable fast boat. His next plan? To offer day trips to St. Kilda, departing from the Isle of Skye.

With emails batting back and forth since then I have tried to help promote the idea through The Three Chimneys’ Facebook page and Twitter feed. Roll on Wednesday, June 19th. I received an email from Derek saying he had spaces available for a St. Kilda trip on Friday 21st, asking if I could mention it on our social media sites with an aside that if I was available it would be great to see me there too. I looked at my schedule: Friday and Saturday off. There was no hesitation in my mind. Carpe Diem.

Friday, June 21st. With all six passengers booked for the trip coming from the north-west corner of the island, Derek had managed to secure Dunvegan pier for our 7.30am departure, rather than previously planned Uig, saving us a fifty-minute drive up to the Trotternish peninsula. I chose to walk from my home in Dunvegan down to the pier on what was a damp, grey morning… but with potential for brightening up. Meeting at the pier it was great to see that of the six of us booked for the trip we were in some way all connected: colleagues (including Three Chimneys receptionist Jane and partner Sam), neighbours and family – all excited about making the epic trip virtually from our own doorsteps. There is clearly local interest, at least.
With introductions over we boarded the Redbay 11 metre vessel for a quick safety briefing and run-down of the itinerary, and by 7.45am were pulling away from the pier and heading up Loch Dunvegan towards The Minch.

I will admit I had been a little worried about seasickness, but with the boat travelling at the speed it does the motion felt is mostly up and down, with little side-to-side movement to really upset the internal organs.
The Outer Hebrides neared, Skye began to fade, and after about an hour and a half we pulled into the harbour at Berneray for a pit-stop. We walked to The Lobster Pot Cafe for a cuppa and snack where happily the forecasting stone wasn’t predicting anything too violent for our onward journey…

Back on board Integrity, Derek expertly navigated us into the Sound of Harris and with a quick warning of the forthcoming “Atlantic Swell” took us out into open sea. We were lucky with the weather – with very little wind to speak of the swell was probably as minimal as we could have hoped for, making for a pretty comfortable journey. I chose to spend the outward leg at the uncovered stern, putting up with the occasional splash of seawater and enjoying what had now become a sunny morning.

With just a little over two and a half hours from Berneray Harbour to St. Kilda, it wasn’t long before the iconic lumps of volcanic rock loomed in the distance. With the sun now beating down we arrived at the archipelago to incredible colours.

And we weren’t alone – as we entered Village Bay not only were there the Harris day-trip vessels but also the renowned cruise ship “Hebridean Princess”. We were ferried over to the pier by Zodiac – boats are not allowed to dock at the pier to prevent accidental introduction of rats to the island.

On shore we were greeted by a National Trust warden with a complimentary guide to the islands, a polite request to respect the privacy of the military base buildings and of their own staff accommodation (some of the more “modern” village buildings) and a word of warning to those of planning to trek to the cliff-tops: the Bonxies (Great Skuas – notorious bullies) are busy protecting their chicks and will dive-bomb passers-by, veering away at the last second… “nine times out of ten…” We had four hours to explore at our leisure.

Walking through the village is fascinating: you can visit the church and schoolhouse, and Number 3 in the main street houses a museum with comprehensive history on the former residents of the islands.

Soay sheep – descendants of the earliest sheep kept in Europe – roam freely across the island, unusual with their brown fleeces and almost teddy-bear-like lambs.

As a bit of a Munro-bagger, I was keen to climb up to Conachair which, at 1410 feet is less than half the height of a Munro but is the highest point of the archipelago. Steaming ahead of the rest of the group I trudged up the relentlessly steep road to the radio station from where the ascent continues up marshy, soft ground with increasingly spectacular views of the other islands. The Natural Trust warden’s words of wisdom proved right, as I was dive-bombed several times by the aggressive Bonxies. I found myself walking doubled over such that my rucksack was the highest point available for them to attack. I made it to the summit unscathed and was treated to phenomenal 360 degree views.

Sam was the only other member of the group who followed to the summit, so we made our descent together down the steeper slopes of the mountain, winding our way past the numerous cleitean structures and dodging the Bonxies. My technique of exposing my rucksack rather than my head proved to be a good one as Sam was slapped on the head a couple of times by the bullies.

We arrived back at the village at the same time as the rest of our group, and congregated ready for the return journey.

Before leaving St. Kilda, Derek took us along the coastline of Dun, where about 30% of the UK’s breeding population of Atlantic Puffins make their burrows, and then around to the base of the cliffs of Hirta which are the highest sea cliffs in the British Isles. Finally, we travelled to Boreray where the island itself and the UK’s highest sea stacks Stac an Armin and Stac Lee are home to around 24% of the global population of Northern Gannets. The cliffs appear dirty white in colour: a combination of nesting gannets and… well… I’ll leave the rest to your own imagination. The flurry of activity in the air is astounding – everywhere you look are gannets in flight with the occasional Bonxie fighting them for their fishing catch.

And so we left St. Kilda as the sun disappeared into cloud. Feeling more than a little weather-beaten I chose to spend the return journey in the shelter of the cabin. Derek gave control of Integrity to crew-member Andy and spent much of the 4-hour voyage chatting to his passengers with continual offers of bottled water, nuts and other snacks.

We arrived back at Dunvegan pier at 8.50pm, sadly with no marine life sightings other than Andy spotting one dolphin which nobody else saw, and then a second one of which I was the only other person to see the dorsal fin. But that’s not a complaint! (But Derek has seen a pod of thirteen Orcas off the west coast of Scotland. Just saying…)

I have spent all of today thinking about yesterday and how enjoyable the whole experience was. When I phoned my sister to relay all the excitement she asked “Would you do it again?” My initial reaction was “No – because it was such perfect weather I don’t think I would be so lucky again.” Having thought about it, though, if the opportunity came up again I would jump at it equally quickly – I’ve “done” St. Kilda in the sun and seen it in crystalline blue sunny beauty looking like the Hawaiian islands used for filming Jurassic Park, but on reflection it would be equally as stunning and even more mysterious in mist, cloud and rain, and far more indicative of the conditions the “locals” endured. Couple that philosophy with Derek’s warm welcome and calm, reassuring presence and the comfort of Integrity and I find myself already longing to make that “Once-in-a-lifetime trip” an “At-least-twice-in-a-lifetime experience”.
In summary:

Would I recommend a St. Kilda day trip from Skye? Yes.

Is it expensive? Not if it’s somewhere you want to go! Do a bit of research and do the maths – if St. Kilda is the main objective of your trip then going from Skye will save you two days travelling to and from Harris.

About Graeme:
Resident on Skye since March 2011 having swapped the hustle and bustle of Dundee for the calm exposure of the Isle of Skye. Restaurant Manager at Lochbay Restaurant, Stein.