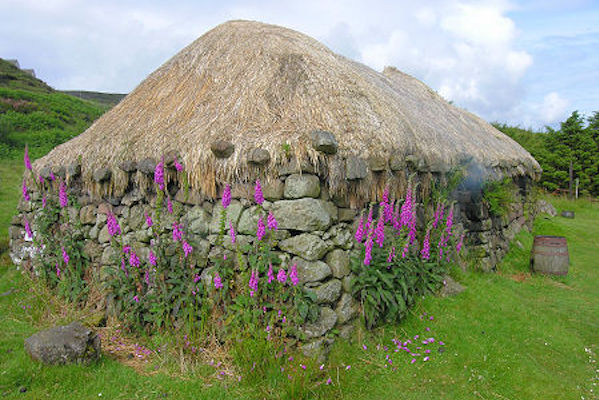 Colbost Croft Museum consists of a replica black house depicting how people lived in the 19th century as well as a replica whisky still.

Four miles from Dunvegan on the single track road to Glendale is the scattered township of Colbost, looking east over Loch Dunvegan. This part of the Duirinish peninsula is best known for the presence of The Three Chimneys, a restaurant with a worldwide reputation. Immediately to the south of The Three Chimneys, on a gentle hillside rising up past the road from the shore of the loch, is the Colbost Croft Museum. Established in 1969 by local man Peter MacAskill (who has since also established the Giant Angus MacAskill Museum in Dunvegan), it was intended to give visitors the chance to experience a way of life that was very common on Skye in the 1800s.

The focus of the museum is the croft house, of a type reminiscent of a Western Isles blackhouse.  The croft house has two main rooms, a kitchen and living room, and a bedroom. The bare earth floor and unadorned dry stone walls leave you in no doubt that this would have been a very basic place to live. Yet you also get the sense that, even in this fairly exposed location, this house would have kept its occupants snug though the worst that a Skye winter could throw at them.