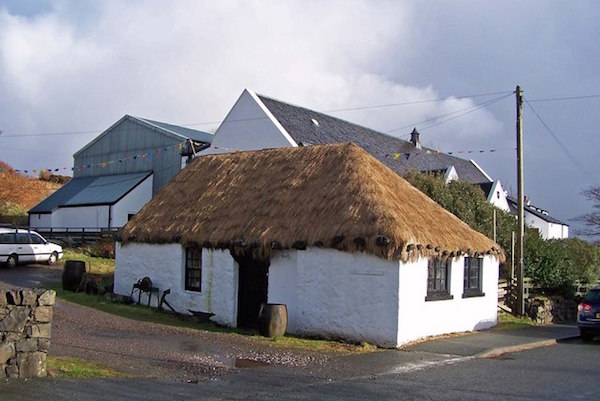 There was a time not so very long ago when thatch or turf-roofed buildings were the norm on the Isle of Skye. Today they are enough of a rarity to attract attention in their own right. Which is why the Giant Angus MacAskill Museum on Dunvegan’s Main Street stands out so strikingly.

Angus MacAskill stood 7ft8in (2.36m) tall, weighed 425lb and lived from 1825 to 1863. He was the tallest Scotsman ever to have lived, and the tallest recorded true giant. He was born at the north end of the island of Berneray, in the Sound of Harris, the fourth of ten children of average sized parents. As a baby, Angus was so small he was not expected to survive. Angus added most of his size during his teenage years, and by his early 20s had become renowned for feats of strength, becoming known as Gille Mor, the Cape Breton Giant, or Giant MacAskill.

So why is there a museum dedicated to him in Dunvegan? It was established in 1989 by local man Peter MacAskill (who also established the Colbost Croft Museum) to provide a lasting memorial to a notable member of the clan who, though he may never have come to Skye, spent his first few years on an island less than 30 miles away.